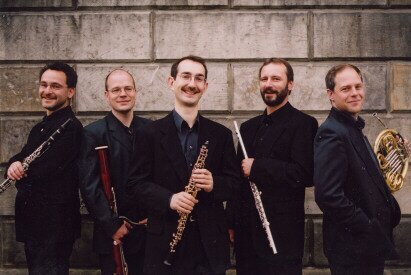 wind quintet of the staatskapelle berlin

In 1994 five soloists of the Staatkapelle Berlin formed a wind quintet, building on their mutual friendship and experience as chamber and orchestra players.
Today the ensemble looks back at ten years of success in more ways than one. October 2003 saw the sold out 10th Anniversry Concert at the Appollo Saal at the Berlin State Opera and November 2003 marked the release of the quintet's first CD on the SONY label.
Lively musicianship and open-mindedness for musical discoveries have made this ensemble and it's exciting programs unique. The versatile reprtoire, embracing classic to avant-garde, includes novel arrangements from entertainment, as well as cross-over.
World premiers of commissioned works by contemporary composers, such as Detlev Glanert and Frank Raschke, as well as works in unususal instrumentations, round out the intersting offerings of the Berlin Wind Quintet.
The five musicians are constantly engaging in the development of new playing techniques and the application of historical performance practices in their interpretation of works from different periods.
Outside of the quintet, the musicians can also be heard in other formations, f.e. the Berlin Wind Soloists, ensemble variazione, or the 14 Berlin Flutists. In demand as soloists and chamber players, musical travels have included many European cities, Israel, Japan, and the United States.
The players of the Berlin Wind Quintet take a liveley interest the development and nurture of young musicians and can be found teaching in several academic institutions in Germany, at master classes abroad, and last not least, the West Eastern Divan of Daniel Barenboim and Edward Zaid.
In the autumn of 2009 Mathias Baier joined the quintett in the place of Ingo Reuter.